My father showed me how to run a business

Mossadeck Bally is founder and CEO of the African Azalaï hotel chain in West Africa. He worked ten years in his fathers' company, together with his brother.

After finishing my financial management studies in France and the United States, I returned to my native country Mali. For 10 years, I worked for my father’s company, together with my brother. We imported foodstuffs such as rice, which we further distributed as wholesalers. We were seeing a lot of suppliers, who often complained about the poor quality of the hotels in Mali. This gave me the idea of opening my own.

I discovered a great opportunity when the Malian state launched a call for the acquisition of the old French Grand Hôtel in Bamako, the capital of Mali. With my newly established company, I was awarded the contract. The renovation started in 1994 and the hotel opened its doors in 1995.
That’s how the ball started rolling. The hotel being highly profitable, we wanted the story to continue. Late 1990s, the Malian state decided to have a new hotel constructed in Bamako, next to a congress centre built by China. Again, we successfully accomplished the project, for which BIO had granted us a loan of 4 million euros.

I became more and more experienced and kept on exploring new possibilities, this time abroad. In many cases, the scenario was identical: a government launched a call and we were awarded the contract. In 2004, there was the renovation of the largest hotel of Burkina Faso in Ouagadougou, in 2007 in Guinea-Bissau, in 2009 in Benin and in 2016 in Ivory Coast and in Mauritania. Currently, we are building new hotels in Senegal, Guinea Conakry and Niger.

70% of our guests come from West Africa, while 30% come from Europe, America and Asia. We regularly have people from the African diaspora. It is true that the poorer Africans cannot afford to stay in our three or four-star hotels. They have to accept staying in a two-star hotel.

However, this does not prevent us from having a major impact on the local economy. We have nearly 2000 direct employees. And each member of our own staff stands for 1.5 to 2 indirect jobs: security staff, food suppliers, gardeners… We also pay local taxes.

With a little patience and perseverance, you can achieve a lot, also in Africa.

Now that I am going through the history of Azalaï, I realize that not everything has been plain sailing. I had to be very patient and I had to cope with setbacks. Our hotel in Ouagadougou was nearly destroyed because of the disturbances in 2014. We had to close it down and are currently renovating it.

Besides, working in Africa takes much more time than working in Europe. Whereas in Europe things are well-organized, procedures are fast and staff are well-trained, this is not the case in Africa, where the working environment is rather hostile. Public services operate slowly, and you have to overcome enormous bureaucratic obstacles. There is no notion of time. What you can realize within 2 days in Europe will easily take a month in Africa. In Senegal, it took no less than 3 years before we got the building permit! Only in Ivory Coast things went much more smoothly.

In Morocco and Tunisia, the government is making efforts to stimulate businesses: they are creating industrial sites where you can start up your business for a symbolic price. In Sub-Saharan Africa, however, no such initiatives are taken. You have to find a site yourself and often you even have to provide the electricity yourself, which increases the cost of investment of course.
There is also a lack of proper training. Do you know that there is no hotel school in Mali? That is why we recruit our staff 9 months before the opening of a hotel. This offers sufficient time to teach them the tricks of the trade. If a school existed, 2 months would be sufficient. In the meantime, we have set up a hotel school ourselves.

So if you want to invest in Africa, you have to be patient. You have to see it as a long-term investment and keep in mind that it will take several years to make profits.

Young people having the move

However, I do not want to paint too gloomy a picture of Africa. There are lots of factors that do function! The negative way in which the international media portray Africa does not at all correspond to reality.

I am therefore pleased to see that many young people really want to make a go of it. And that is necessary! Mali's population will double by 2050, and all those young people will have to be employed. Fortunately, the opportunities are countless. Did you know, for example, that Mali - the largest cotton producer in Africa - exports 95% of its cotton unprocessed? And then we import T-shirts and pants, which we should be producing here. The same goes for food, the digital revolution, the hotel industry... Young people, both here and in the diaspora, are seizing these opportunities. For example, a young Malian woman has returned from the diaspora. She started up Zabbaan, a flourishing company producing fruit juices on the basis of local fruit.

I also like to personally encourage young people. That's why I'm regularly giving lectures in schools and incubators. Personally, I learned a lot from my father, who was a role model for me. He showed me how to run a business, he coached me and imparted me values and advice... I am now happy to share my own experience with young people, because bureaucracy doesn’t always make things easy. But young people should not focus on the state alone; the state really cannot do everything by itself. With a little patience and perseverance, you can achieve a lot, also in Africa. 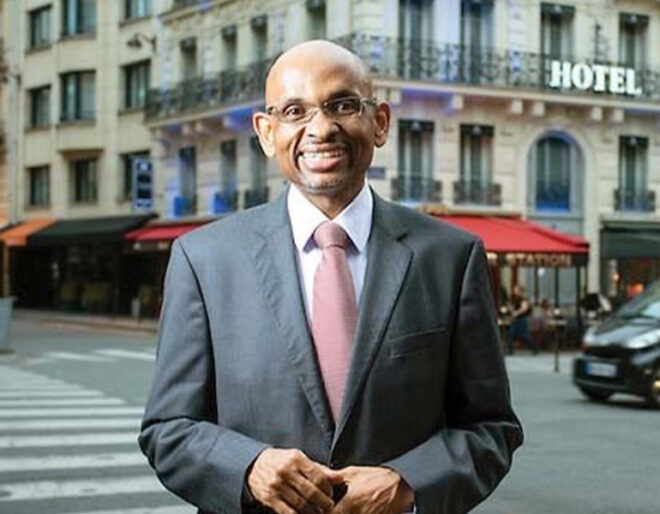 Mossadeck Bally is founder and CEO of th African Azalaï hotel chain in West Africa. He worked ten years in his fathers' company together with his brother. During his time there he met with a lot of suppliers complaining about the poor quality of hotels in Mali. That gave him the idea of opening his own.